I don't reveal the real secrets of vedic astrology in free articles here. If you want to learn advanced astrology click on the contact me link above.

Birth chart of a person with a lot of troubles in life: also loneliness (Vedic Astrology).

Home : Vedic Astrology: You are here

Below is the north Indian Vedic birth chart or horoscope of a person with a lot of troubles in life though these troubles are not related to health. Click here to see his birth chart if you are on mobile. Chart on the right is Navamsa. 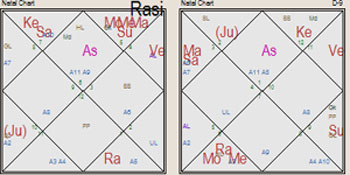 Here are his planetary positions in the birth chart.

Here are some of the facts about this native.

2) He has no elder siblings. This may be due to the fact that his 11th house lord, Moon, is again placed in the 12th house of losses. 11th house represents elder siblings and uncles and he doesn't have even uncles.

6) His 12th house lord, Sun, is placed in its own sign and own house and that is protecting his father and his father is still alive as Sun represents the father in Vedic Astrology. A planet sitting in its own house always protects that house. So he is almost alone in life and his father is only his companion but he is also in the old age. The native was very much depressed but still, he is bold as his Moon is placed in a fire sign of Leo. Moon does well in a fire sign.

7) In terms of profession, he is doing a job in a foreign company (multinational) and he is into the marketing and advertising in the bullion market but he is also planning to market and advertise in the real estate industry.

If you see his lord of 6th house of daily routines is going into the 2nd house in the sign of Libra which shows trading as Libra is a sign of trading (buy and sell) and 2nd house is the house of wealth or finances or currencies. His 2nd house lord, Venus, is placed in the 11th house of investment market and this shows doing trading in the investment market which is the bullion market for the native as his major planets are seated in the sign of Leo in the 12th house and the sign of Leo is really a sign of speculative business. Also, his 11th house lord, Moon, is placed in the 12th house which shows his investment market is related to Leo and > gold and silver are represented by Leo (Sun) and Cancer (moon) respectively.

His 10th house lord, Mercury, is placed in the 12th house and 12th house is 3rd from the 10th house of profession and anything 3rd is marketing and advertising and he is actually into the marketing in the bullion market.

Plz note: I am an astrologer from New Delhi, India and if you need horoscope reading services or want to learn the real secrets of Vedic Astrology then plz contact me through this site.

Birth chart of a person in Army

Is Ketu Malefic and can it bring losses?

What are the effects of debilitated Mars in different houses?

How to interpret Mars for predictions in Vedic Astrology?

Which planet is enemy for each ascendant in Vedic Astrology?

Which location of Saturn in the Vedic birth chart can give a lot of money?

When can Rahu give a lot of wealth?

Which planet in the birth chart will give gains?

How to resolve career problem in just 6 days using a Vedic Astrology Remedy?

Can Sun in Cancer sign in 4th house make you a waiter or a chef?

In what way 6th house helps in predicting in Vedic Astrology?

How the sign on the 4th house helps in predicting in Vedic Astrology?

Can Sun in Virgo in the 3rd house make you a lawyer?

How Libra Ascendant can be famous as an actor?

How 8th lord Saturn in the 9th house make huge amount of money?

Do you know 6th house lord period may give difficult times in life?

Can Venus tell where from your money will come in life?

Can debilitated Jupiter make you a vehicle driver?

Can you work in a Call Center if 1st lord Mercury is in Pisces in 10th house?

Can Rahu in Gemini in 8th house give IT Career?

If you are a regular reader of this site plz donate something such as $3 (INR 200) or $4 (INR 300) or any other bigger amount. Plz click on the donations link above for payment instructions. Also, if you want to learn to make perfect predictions in astrology then you can join my advanced vedic astrology tutorials as mentioned on the "contact me" link above. Your small donation will help me know how much appreciable my content is.

Plz note: Contact me through this site if you want to learn how you can regularly track the incoming of wealth in your life through Vedic Astrology

Disclaimer: The suggestions in the article(wherever applicable) are for informational purposes only